In Photoshopping Polar bottles – part 1 I showed you the process of making two of the Polar Bottle-themed images I had posted on Instagram, Twitter and Facebook since I became an official ambassador for Polar Bottle USA. In this post I’ll be showing you how I made the other two.

I got the idea for this image when reading about juggling family, work and cycling. I thought that juggling lots of Polar bottles would be nice, so I started photographing my water bottles from different angles. This would help with getting the sun light from the correct angle, when rotating the bottles in the image.

Photographs of my Polar bottles

I also needed an image of me in a juggling position, so I asked my girlfriend to take lots of pictures so I would have enough to choose from. 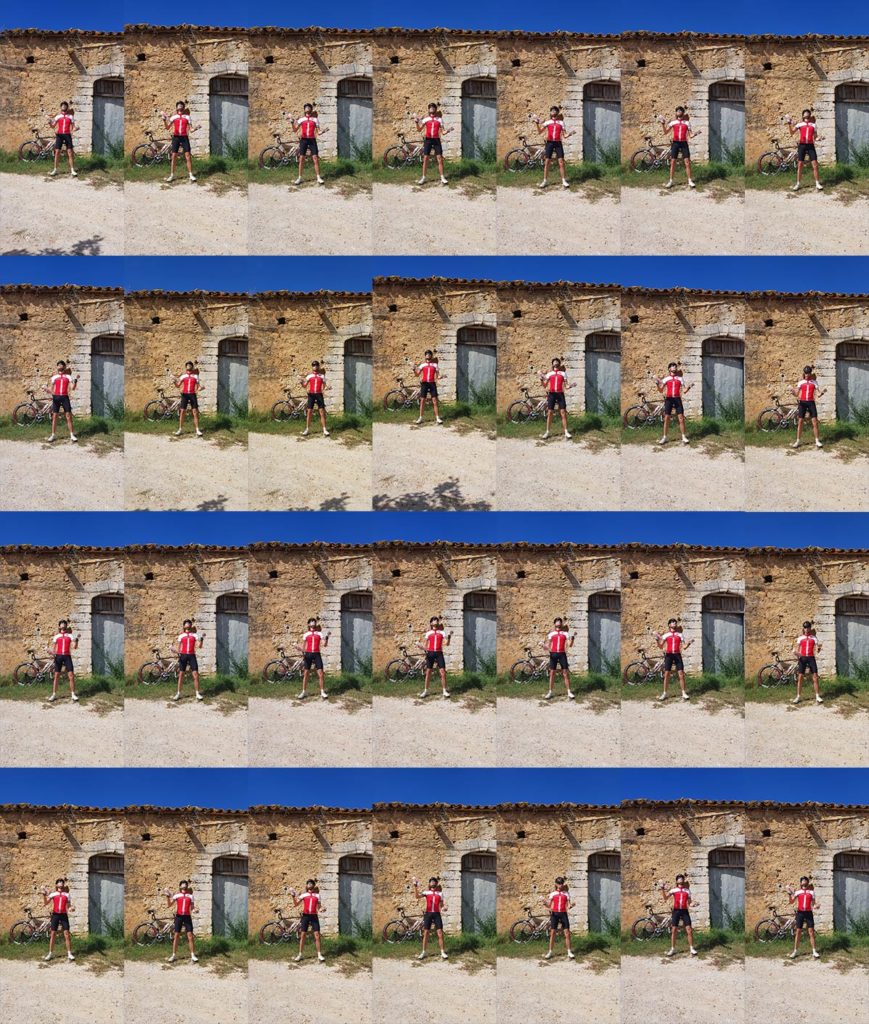 I decided to go with this one: 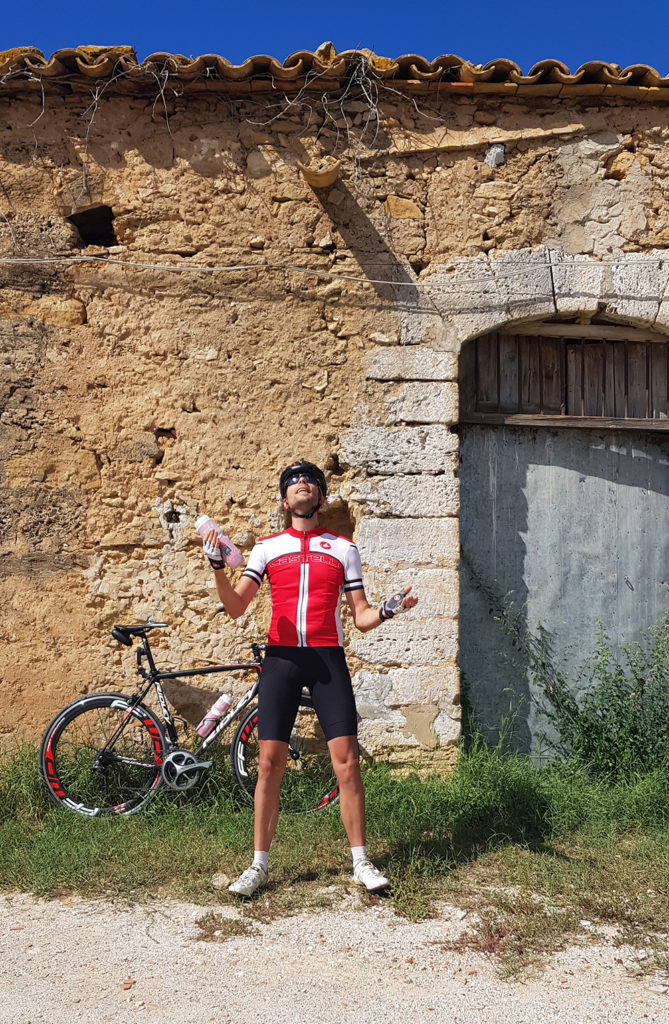 The image I started with

Next, I added extra space above the barn, added some clouds and did some minor tweaks (like deleting the wrinkles in my jersey).

Adding the sky and some minor tweaks

Now I needed a guide for the positioning of the bottles, so I drew a juggling arc onto a separate layer of the image (so I could delete that layer afterwards).

After I cut out all the individual Polar bottles from their pictures, I placed them on the arc and rotated them, so it would look like the sun light hit every bottle from the correct direction.

Adding the bottles to the juggling arc.

And after some final tweaks, like adding some shadows and tweaking some colors, I was done!

When working out an idea in Photoshop it’s often hard to find the right balance between the time I spend on it and the desired end result. Of the four Polar bottle themed images the next one is the one that took the most hours to produce and it’s also the one I’d still wanted to invest more time in to get all the details right.

I thought about how happy I am to have my Polar bottles with me on the hot summer bike rides and decided for my next project to take the warm Sicilian climate to the extreme, where the whole bike would melt except for the two Polar bottles… This is the image I started with. It’s my Ridley Helium SL photographed near the swimming pool of the Borgo delle Olive. 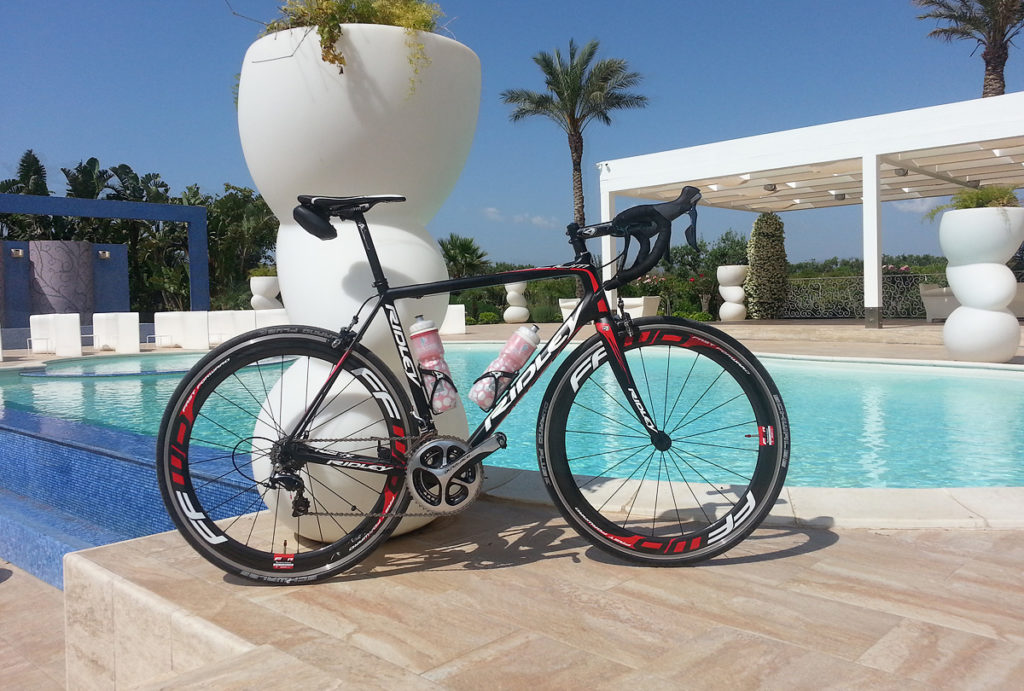 First, I needed to cut out the bike from the image and “repair” the background. 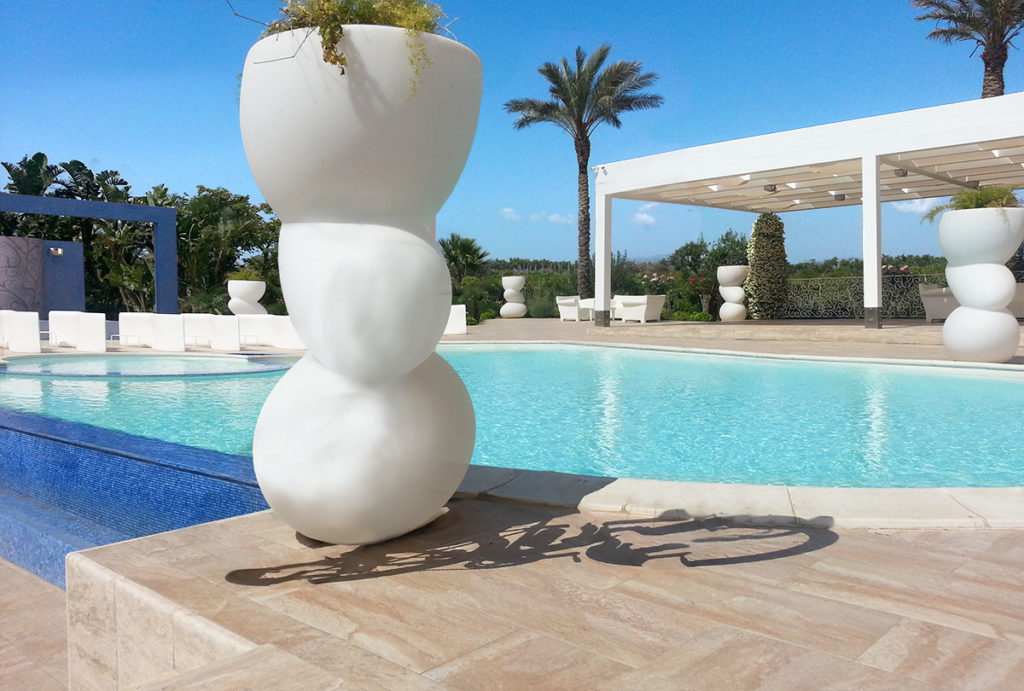 The bike deleted from the image and the background cleaned up a bit.

Then I cut the bike in two parts and positioned them on the background. 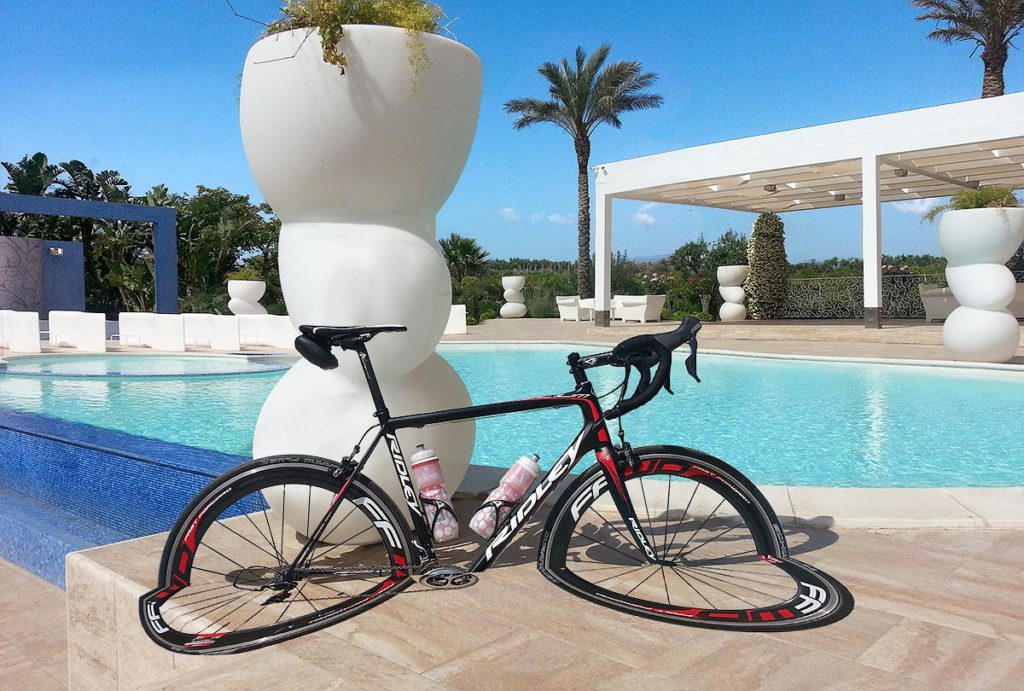 The two halves of the bike positioned on the background image

The melting effect was achieved by hand using the liquify filter in Photoshop. 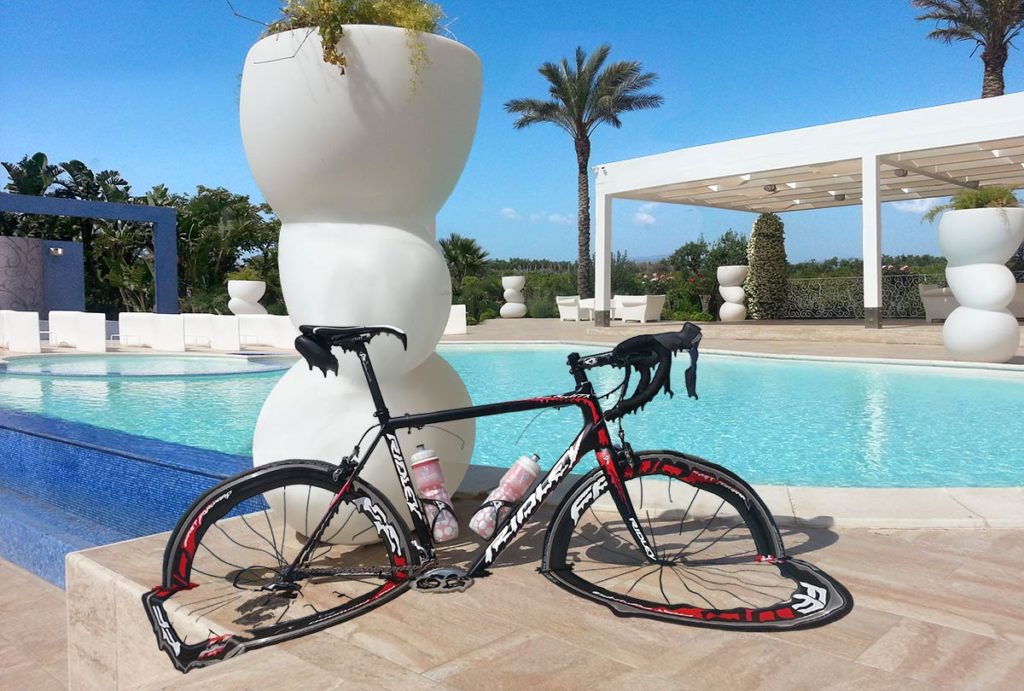 The melting effect made with the liquify filter

Then I needed to make a puddle of melted bike material. 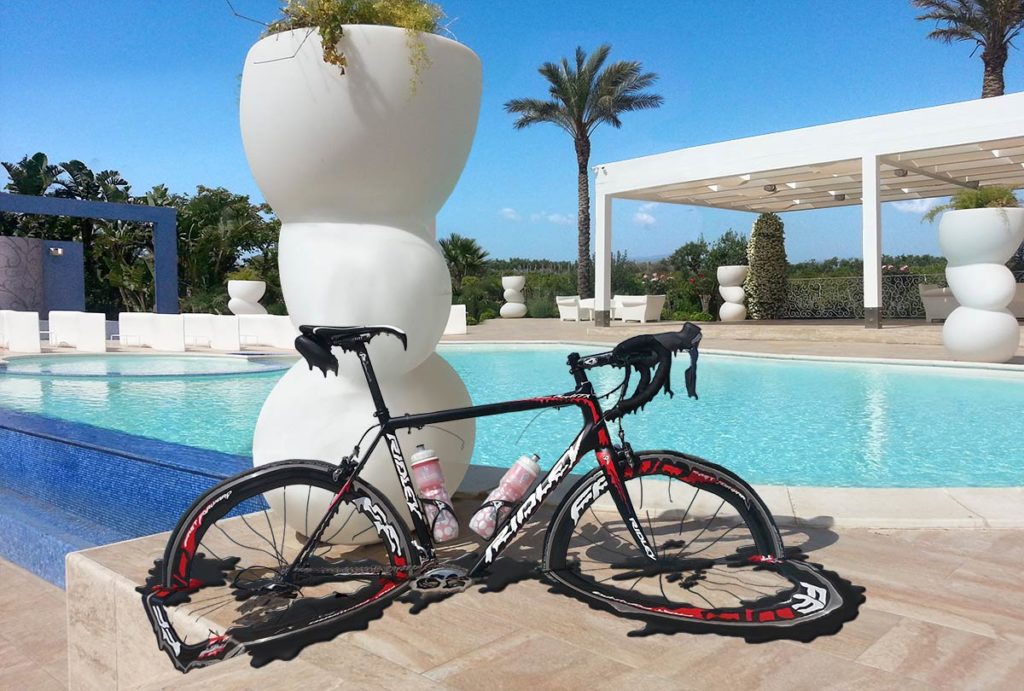 The puddle added to the melted bike

For the final result I added the bike shadow on the white flower pot behind it. 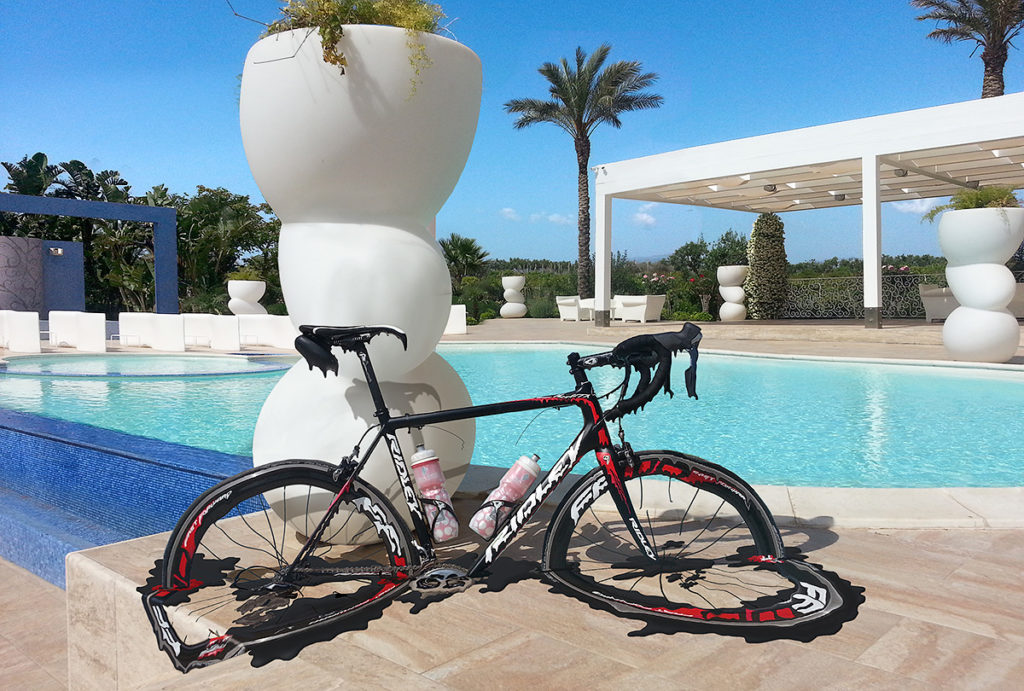