We’ve made it! Stories from a cycling guide in Sicily

A few days ago, I had the pleasure of being a cycling guide for a group of Dutch friends. Every year these guys go on a short trip together and this year they decided to come to Sicily. Leo, the organizer of the trip, had asked me whether I could come up with some nice activities for the boys. I proposed a bike ride and they all loved the idea! So I arranged the rental bikes and on May 17th we all went to Eurobici in Partinico to pick them up and to go for a 55 km bike ride.

After mounting the required pedals and setting the right saddle height for everybody, we were ready to go. Two friends were unable to ride with us, so they would drive the “broom wagon”, a large Ford Transit they had rented for their holiday. I wasn’t told beforehand that there was only one cyclist in the group and that the others usually don’t ride a bike other than to go to work or to bring the kids to school, but as soon as they told me (just before we left), I figured that the broom wagon would probably come in handy later on… 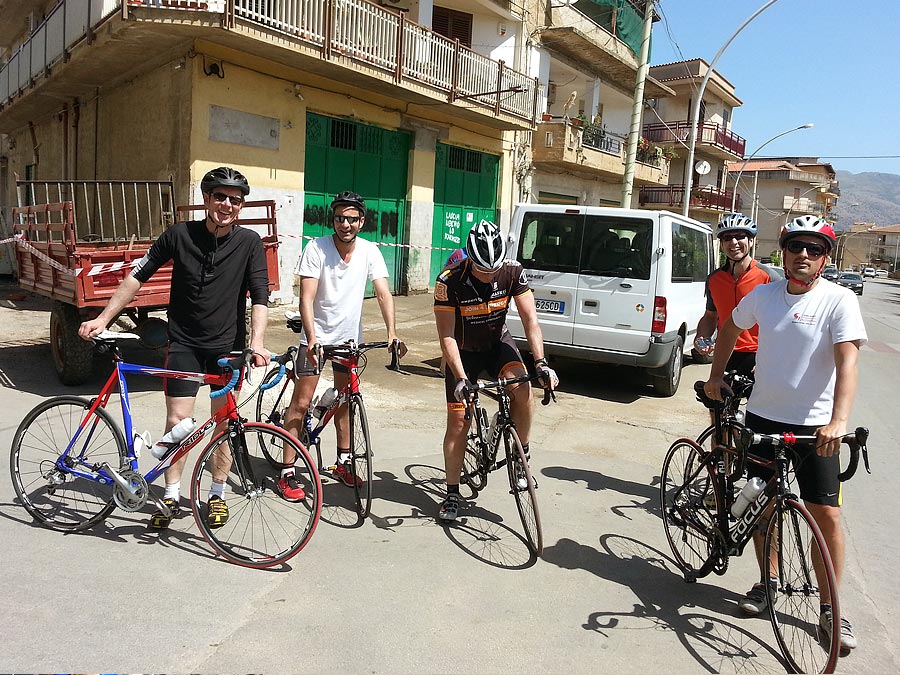 We took the SS113 in the direction of Trappeto and after a short descent, the guys started on a short ascent (90m, 4-7%). 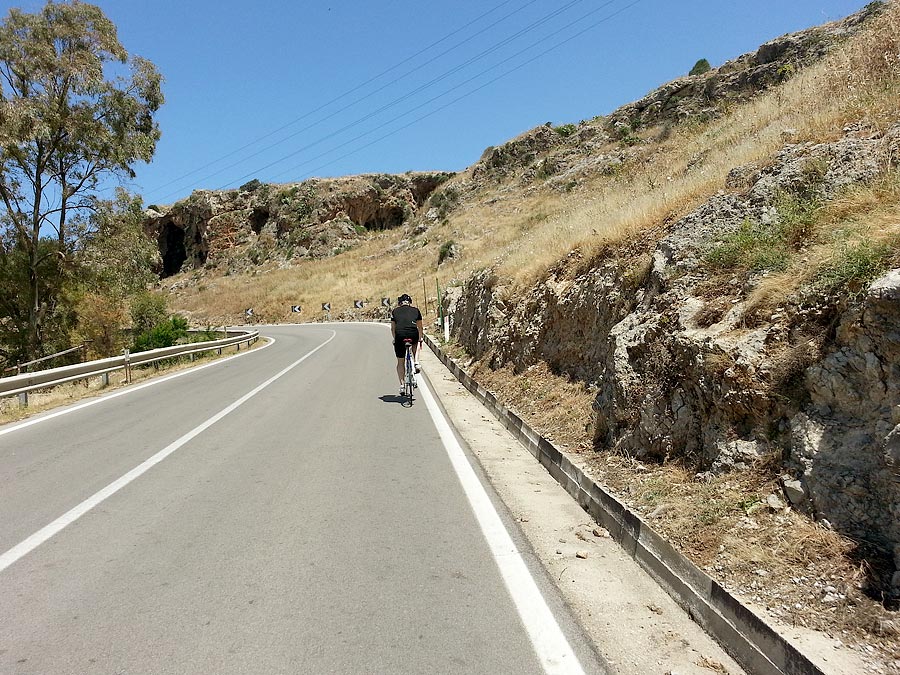 On the first climb 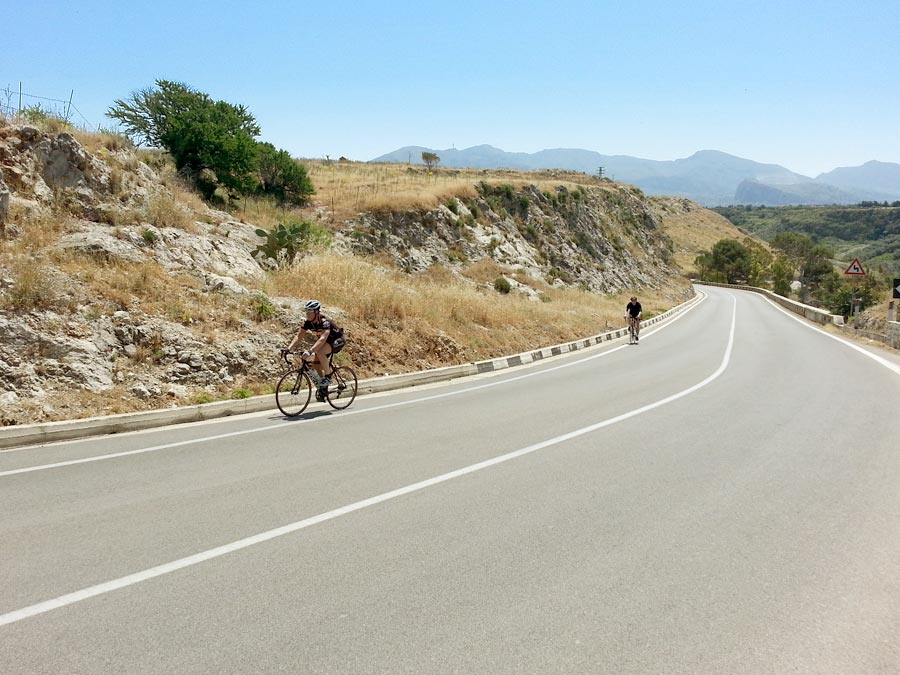 After the short climb, it was clear that the last climb would be a real challenge for a few of them 🙂 Anyway, we went on and soon the guys were again admiring the views and enjoying the nice, warm weather. We passed through the towns of Terrasini and Cinisi and the guys soon spotted the broom wagon on the side of the road. Their friends had bought lots of cookies, bread, fruit and water, so time for a break! 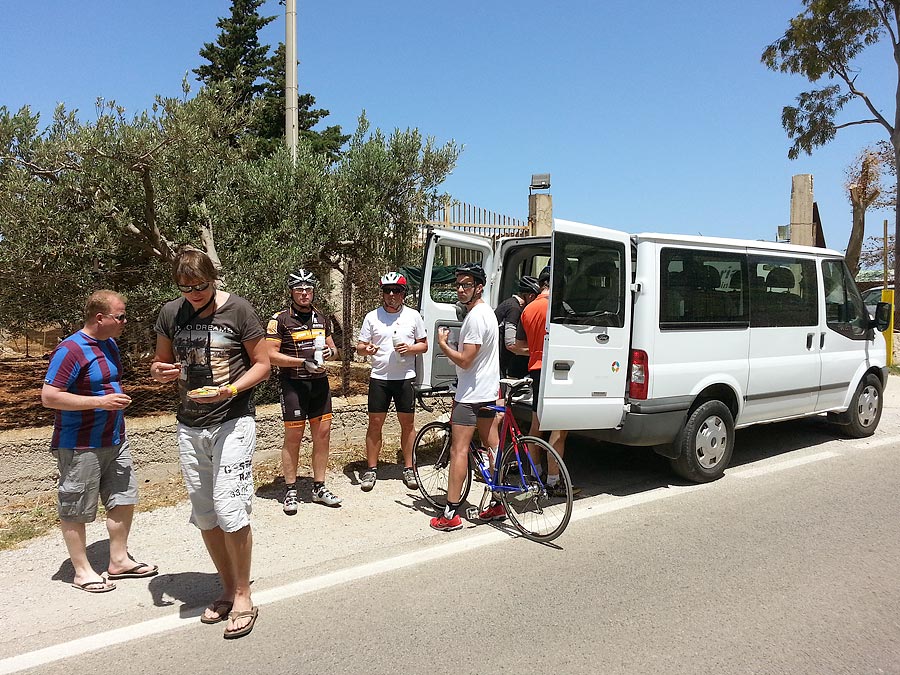 Time for a break!

“How many kilometers have we done already?”, “How much climbing do we still have to do?” were questions I tried to answer as vaguely as possible, seeing we only did 23 km and still had over 650 meters of climbing ahead of us..

After 15 easy kilometers we arrived at the bottom of the climb and I explained the guys what they could expect: first some 2-3%, then a stretch of 5% going into town and passing the caste of Carini, then the remaining part of the climb with 5-7% gradients and a small stretch of 9%. Off we went! I followed the first two cyclists and soon noticed the others were far behind, so I told the “breakaway riders” to follow the road for the “centro storico” and stopped and waited for the last cyclists. It took a while for them to show up, but when I saw that they were okay (just riding much slower), I went after the first riders to explain which way to go. I had lost a lot of time waiting for the two who got dropped and saw the first few approaching a crossroads with traffic lights, where they had to turn right in the direction of the “centro storico” (historic town center), a road with a 5% gradient. However, they missed the sign for the “easy route” and went straight ahead and started a 12% climb into town…! I raced to the front, but as they were already on the climb and they were actually doing a rather good job, I decided to let them finish the steep stretch and told them to wait for the others on the town square. I went back down to pick up the last cyclists and after a short break we rode out of town in the direction of Montelepre. 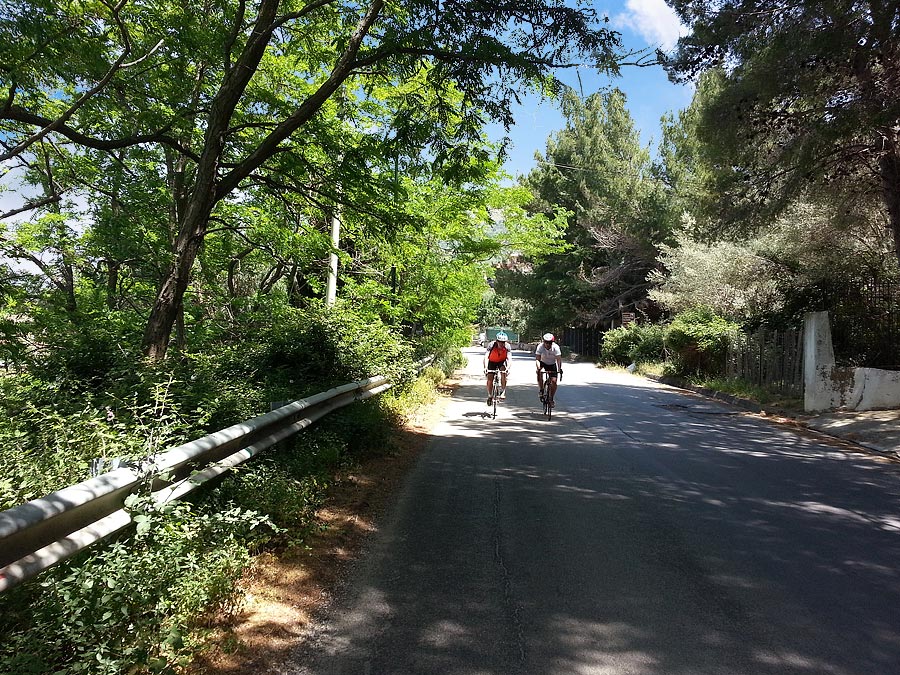 On the climb near Carini

Soon we saw another big gap between the first and last riders, so I proposed to stop and wait for them.

Having a break on the Carini Climb

Looks like we are all ready to go on… 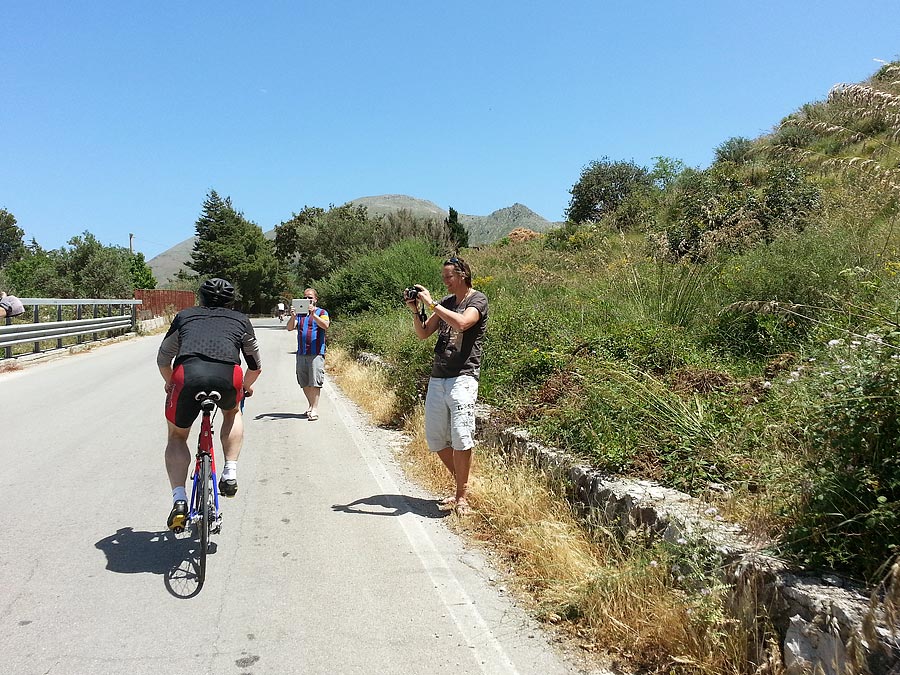 Even though they were clearly tired, they still could enjoy some amazing views on the climb: 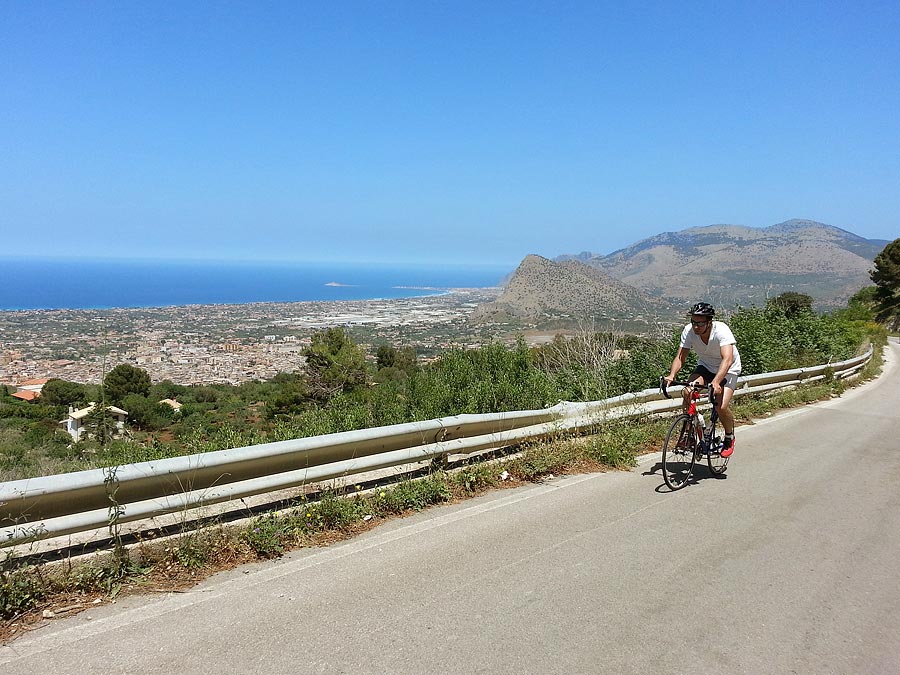 On the Carini climb

We were overtaken by the broom wagon with Leo hanging out of the window trying to cover the event as good as possible. 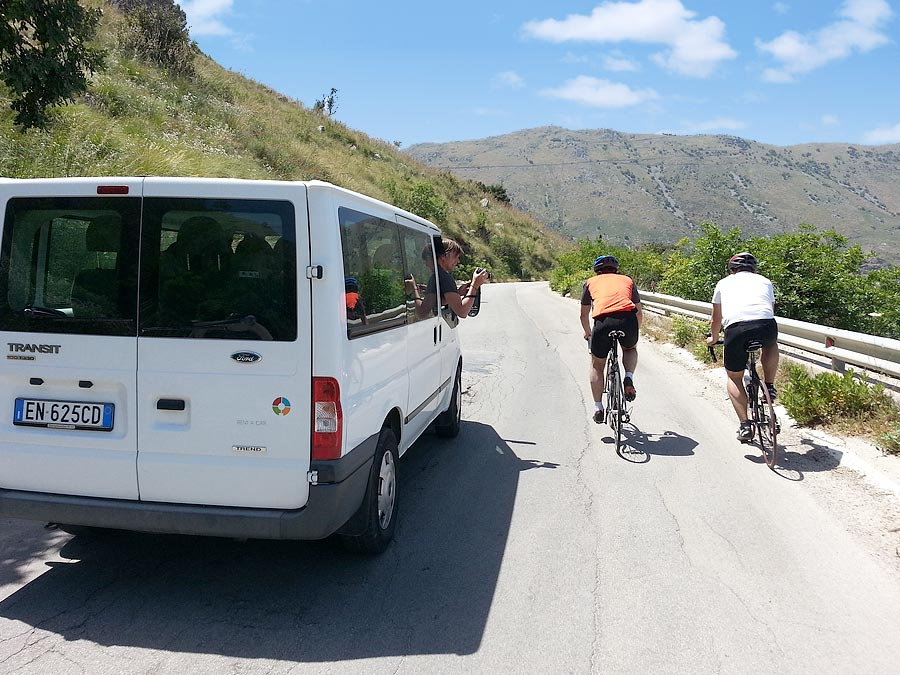 Live coverage of the climb…

Then, almost at the end of the climb, when he just did a 7% stretch, one of the Dutch friends needed the help of the broom wagon… 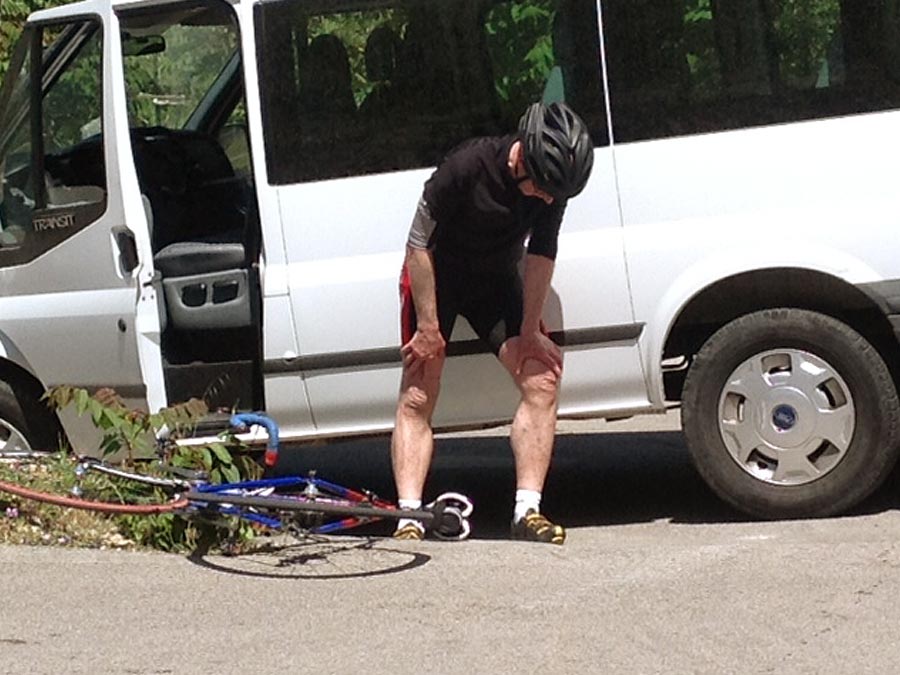 He was the only one doing a part of the climb by car, the others all made it and they were proud of it! 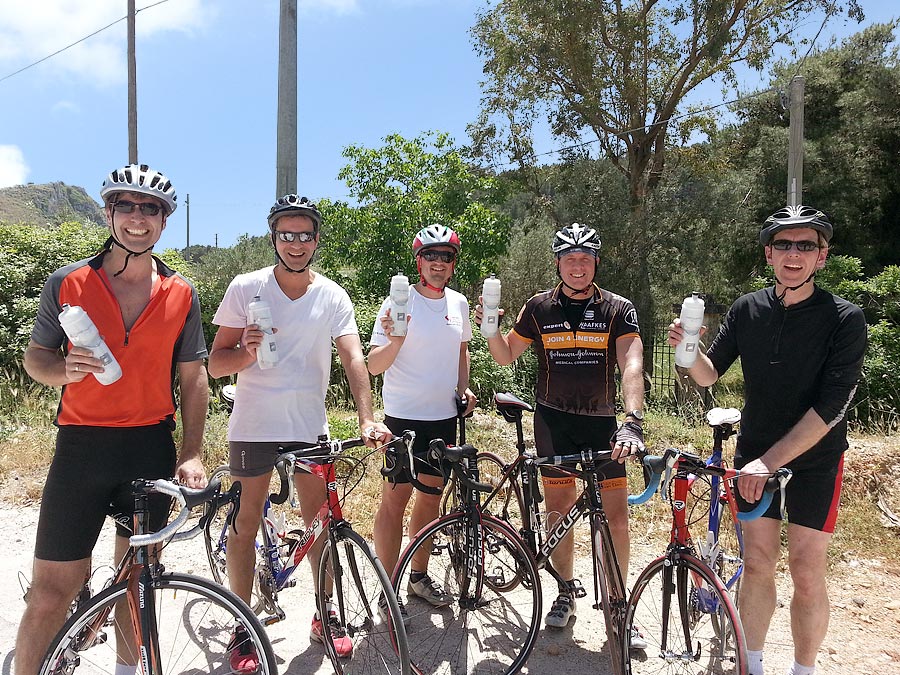 The last stretch is almost one big descent, so soon we arrived back at Eurobici’s. We averaged at 20 km/hr but the guys had a great time and according to Leo, they will be talking about this day for many years to come. I hope they do and I’m sure the total ascent of the ride will increase with every time they talk about it…:-)