Since my last accident I’ve been thinking more and more about the safety aspects of cycling. There were no witnesses of the accident in January, so it took a lot of time and effort to prove that the driver actually hit me. I’m pretty sure that we wouldn’t have had any discussions if I had a video of what actually happened that day. At that time I only had one camera, but I forgot to bring my bike mount from Sicily, so when I went out for a bike ride I had no camera on my bike. Because I was hit from behind, a camera on the front would not have been enough to show what had happened or to avoid discussions. That’s why I decided I needed a second camera to film everything behind me.

There are several mounts on the Garmin website, but for attaching a camera to your seatpost, there’s only one option, the Virb tube mount. This mount is as bulky as it looked on the website:

The bolt also sticks out a lot:

The tube mount for the Garmin Virb camera

Even though it would probably be not that easy to touch that bolt while cycling, I decided to cover the end of the bolt and a valve cap was a perfect fit!

Covering the bolt of camera mount with a valve cap

I wanted to do a nice, relaxing bike ride in the sun and test the cameras, but I was back home after 30 minutes. The camera mount is so bulky, that my right leg touched it with every pedal stroke. I was afraid this was going to happen, so I left home wearing a pair of old Castelli bib shorts. I’m glad I wasn’t wearing my Castelli Premio bib shorts, otherwise I would have been pissed! This is what my bib shorts looked like after 10 minutes of pedaling (click on the image to enlarge it):

Clearly, this is not a good tube mount! I’ve looked at the Go Pro mounts, but they look pretty bulky as well. I don’t understand, why the big brands don’t offer a more subtle solution, like this 3d printed version I found online:

Besides the fact that the mount will ruin your bib shorts (unless you’re cycling with your knees outwards I guess), it’s pretty annoying hitting your mount with every pedal stroke. So it goes without saying that I’ll be looking for a different solution. As soon as I have one, I’ll either update this post or write another one. Edit: I found a solution! You’ll find it below.

Now back to my test. The camera manual explains how you can control multiple Virb cameras with your Garmin bike computer. One of the cameras has to be the “main VIRB” and the other camera(s) has/have to be set to “extended VIRB”. I had no problems setting the cameras to main and extended and they connected immediately. 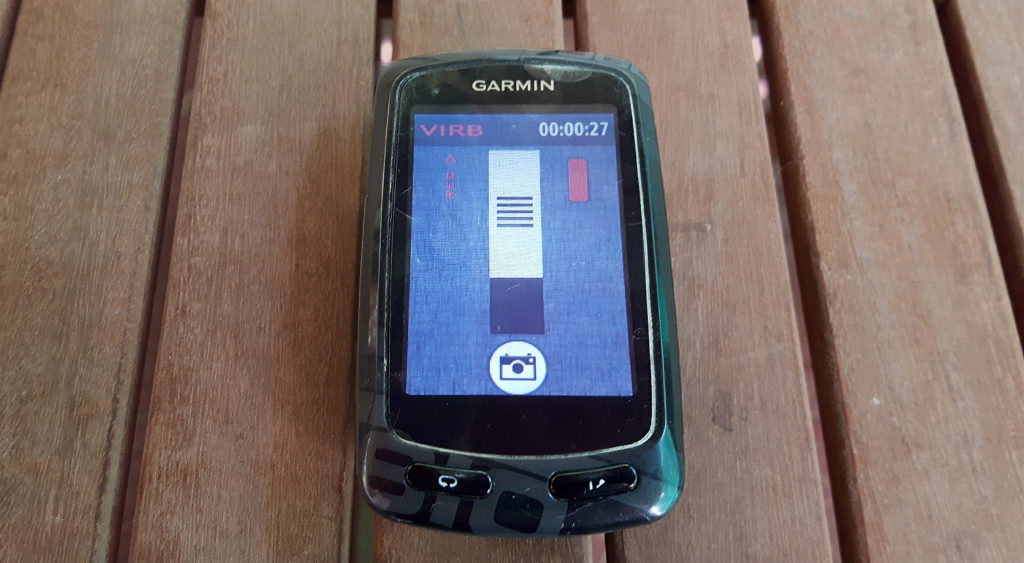 The Garmin remote control screen, showing the Virb is recording

Recording and taking pictures with both cameras is easy as pie with the Edge bike computer. During the short test ride I took several photos and shot a few videos. Here are two photos I took with both cameras simultaneously:

I have had many issues with Garmin products in the past, but I encountered no problems using two Virb cameras and controlling them with the Edge 810 bike computer. I’ll definitely use both cameras on solo rides.

By the way, if you’re also using your cameras as “dash cams”, then make sure to use the lowest resolution (720p for a Virb Ultra 30) and to turn off the extras you don’t need, like Wi-Fi, Bluetooth and sensors, so your batteries will last much longer.

Edit: after writing this post, I started looking at alternatives for the Garmin tube mount and tried several rings and mounts. Then I looked at the Garmin combo mount and thought “Why not?”. I detached it from the handle bars and put it around the bike frame. And what do you know? It works! It might not be the most beautiful solution, but it works. Here it is:

This mount is much less bulky:

The combo mount is not bulky at all

Lots of space between the legs and the mount

It’s clearly an improvement. I don’t understand why Garmin hasn’t made a mount that is less bulkier and that can be fixed to either the frame or the seatpost. I could always go for a different solution, like a 3d printed version, but for now this is working like a charm!