Houston, we have a problem – Stories from a cycling guide

A few weeks ago I was contacted by an English tourist called Dominic, who wanted to rent a road bike for him and his 13 year old son, Eddie. They also wanted to do a ride with a guide, so I arranged the bike rental and we made an appointment for the bike ride. Dominic wanted to do around 50 km and maximum 500 meters ascent and he told me his son had no problems climbing 7% grades.

Last Sunday I met up with Aronne, the 14 year old son of Giuseppe from the bike shop and we rode to the train station in Castellammare del Golfo where Dominic and Eddie were waiting for us. I had planned a ride towards the temple of Segesta, which would be almost exactly what Dominic wanted: a 50 km ride with just a little over 500 m ascent and one steeper climb with maximum 7% grades.

It was sunny and around 37°C when we left for Segesta. 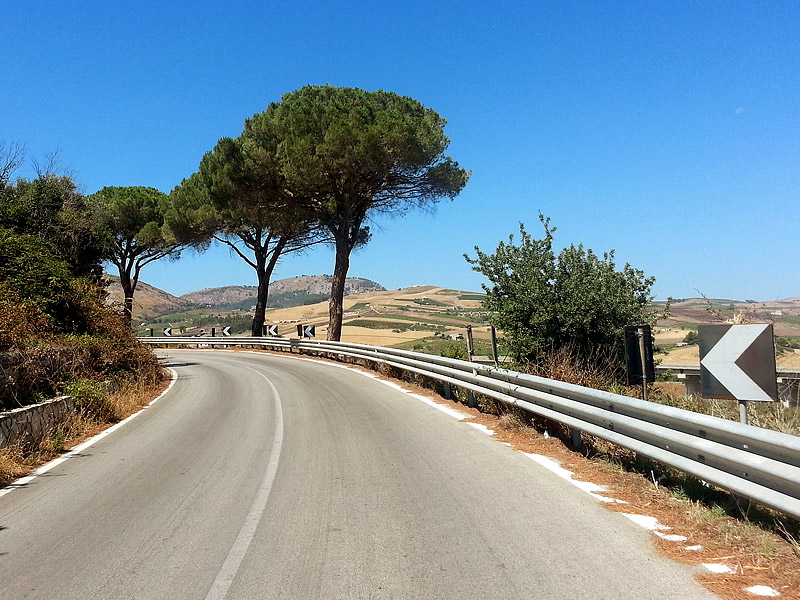 On our way to Segesta, Sicily 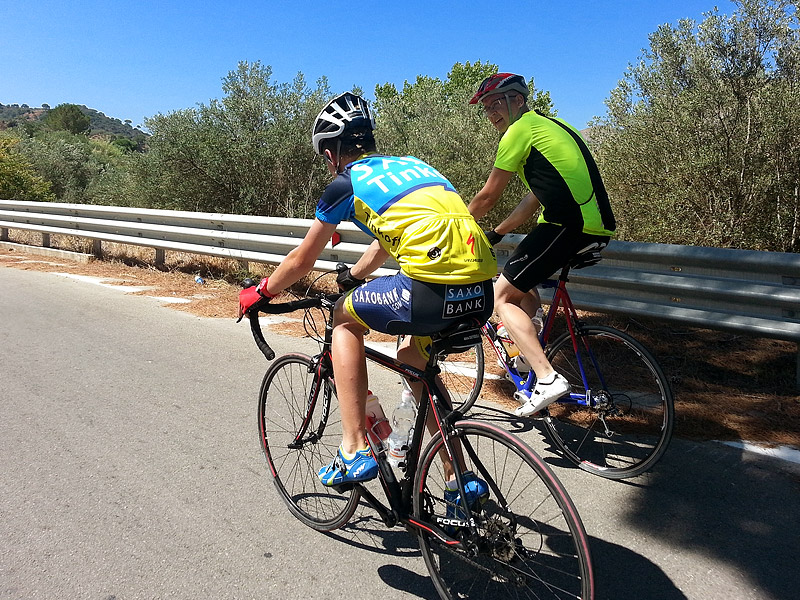 Dominic and Eddie near Segesta, Sicily 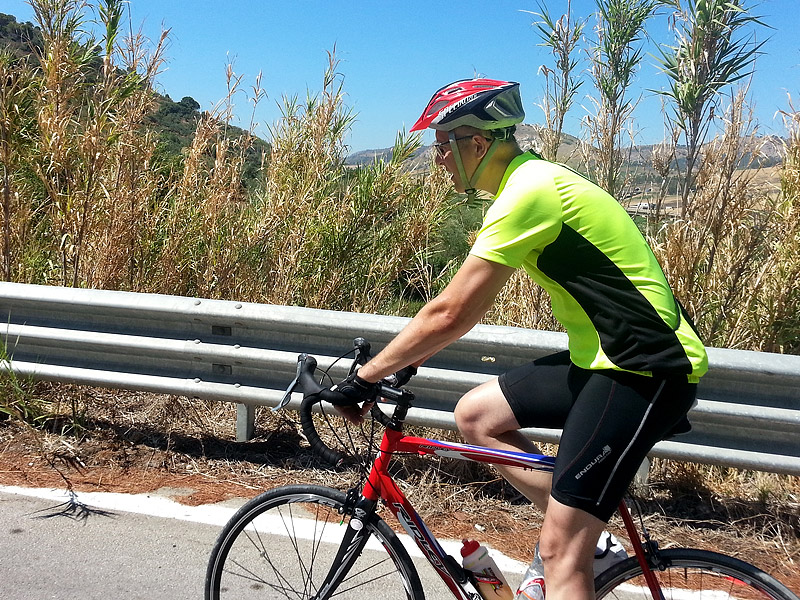 We followed the hilly road in the direction of Trapani and soon we arrived at the bottom of the climb towards Segesta. Details of the Segesta climb:

At the start of the climb towards the temple of Segesta 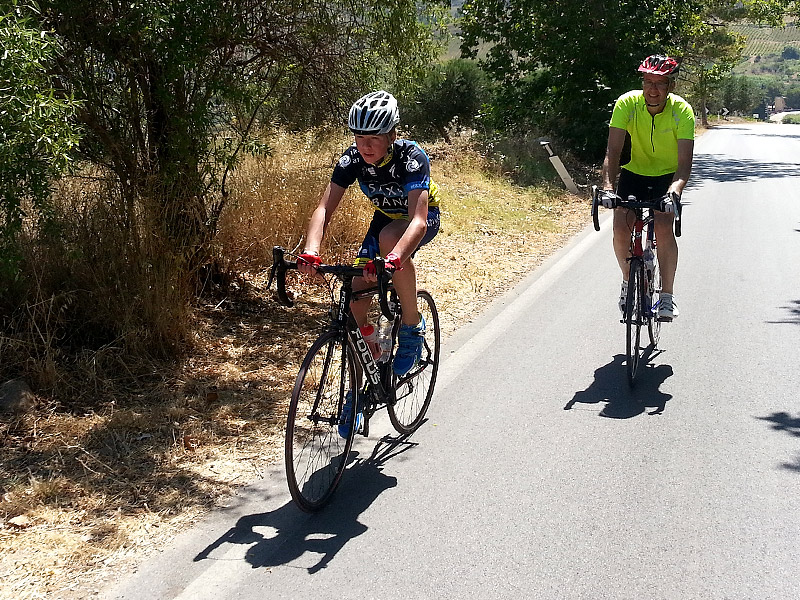 Dominic and Eddie on the Segesta climb

On the climb, my Garmin showed a temperature of almost 40°C. Aronne clearly had no problem with these kind of temperatures… 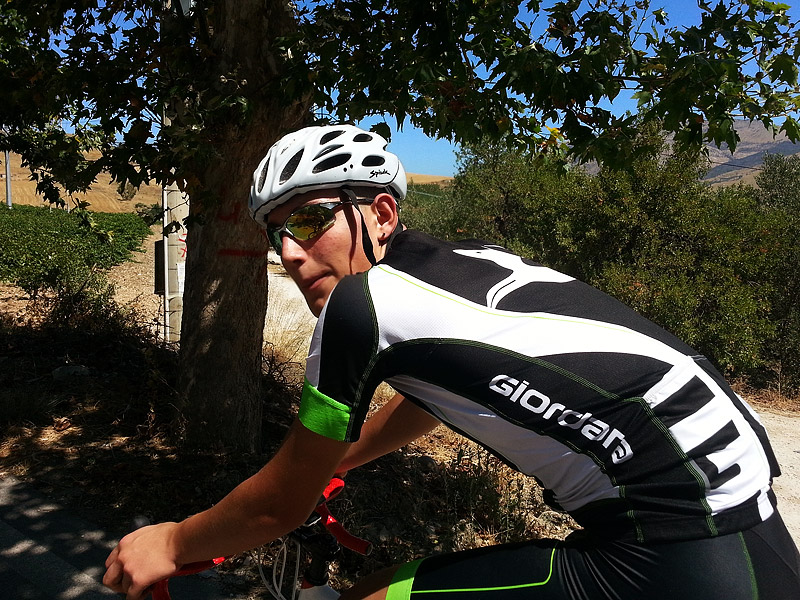 Aronne on the Segesta climb 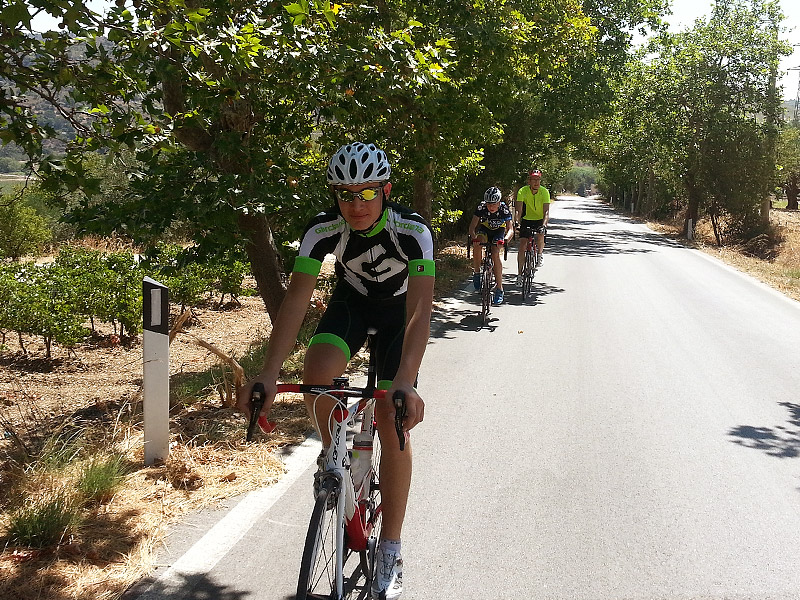 Aronne, Dominic and Eddie on the Segesta climb

When we arrived at the top of the climb, we decided to stop in the shade. 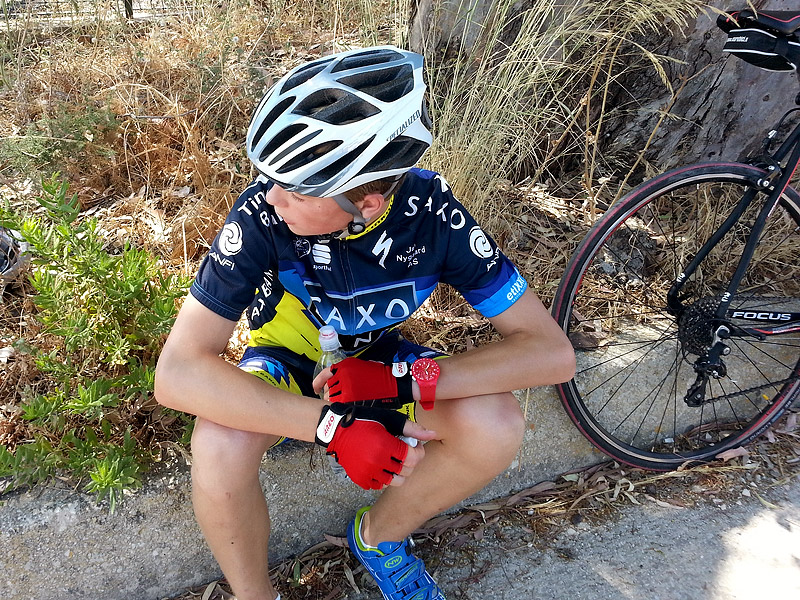 Eddie taking a break near the temple of Segesta 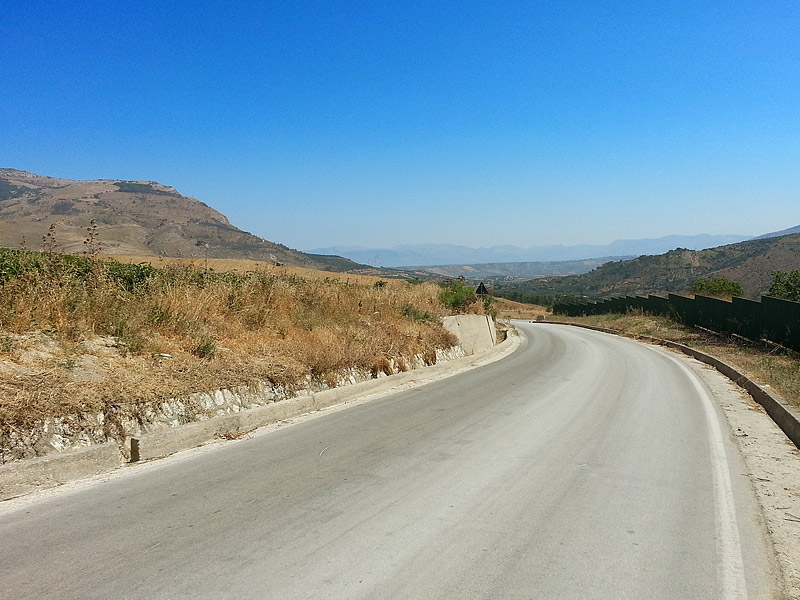 A hot and sunny day in Sicily!

Eddie was really tired, so I decided to go back in the direction we came from. After the difficult ascent in the hot Sicilian sun, he clearly enjoyed the nice descent 🙂

Eddie on the descent near Segesta 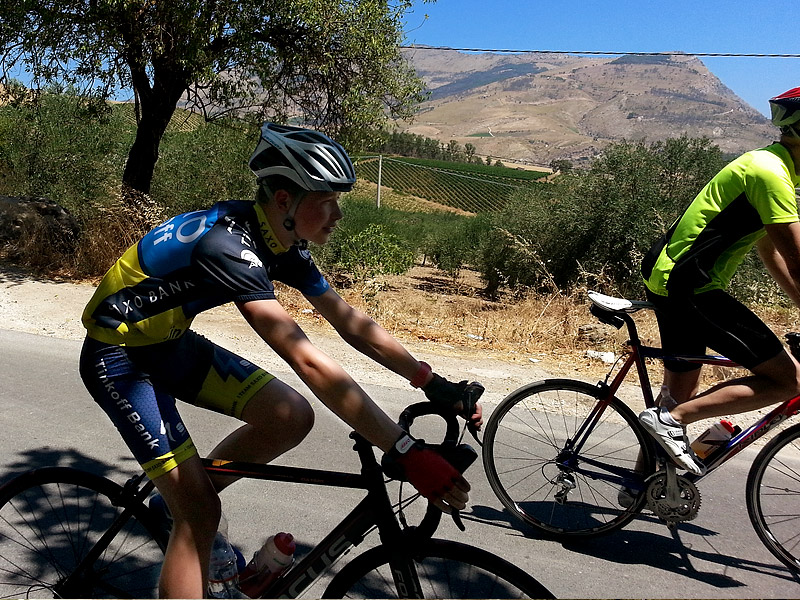 Eddie and Dominic on the descent near Segesta

The climb towards Castellammare del Golfo is an easy one, but the water bottles were empty, so time for a refill! 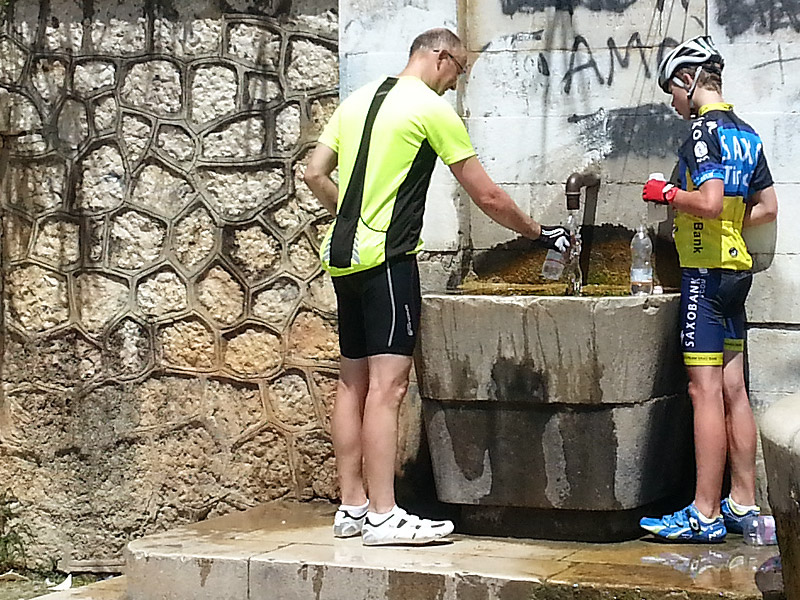 Time to get some fresh water

Details of the climb towards Castellammare del Golfo:

After Aronne, Dominic and Eddie had refilled their water bottles they continued to climb. I had to wait for a few cars to pass, so as soon as I could cross the road I tried to catch up as quickly as possible with the rest. I tried to move the chain to the big ring when I heard a loud noise. I looked down and saw my derailer hanging to the side! I got of  the bike to take a good look and this is what I saw…: 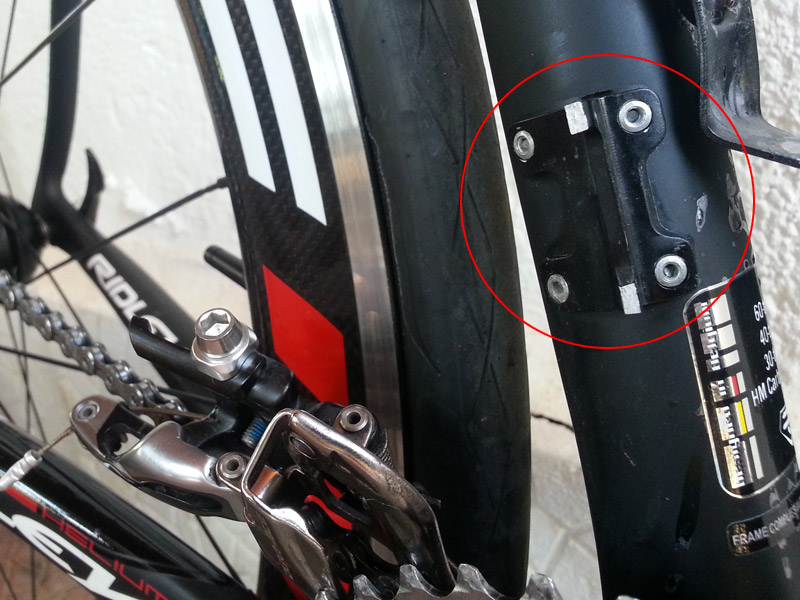 Mannaggia, the derailer clamp just broke off, so no more pedaling for me!

The other three were a few hundred meters away, but Aronne had looked back and saw me checking out my bike. He came back when I was already on the phone with Giuseppe from Eurobici. I knew he was in the area so I asked him whether he could come and pick me up. I explained him where we were and then Aronne and I walked to the top of the climb. On the descent I was constantly looking at the derailer trying to avoid it getting stuck in the rear wheel and making things worse, but fortunately it stayed in place. We caught up with Dominic and Eddie and I explained what happened. Soon after Giuseppe arrived: 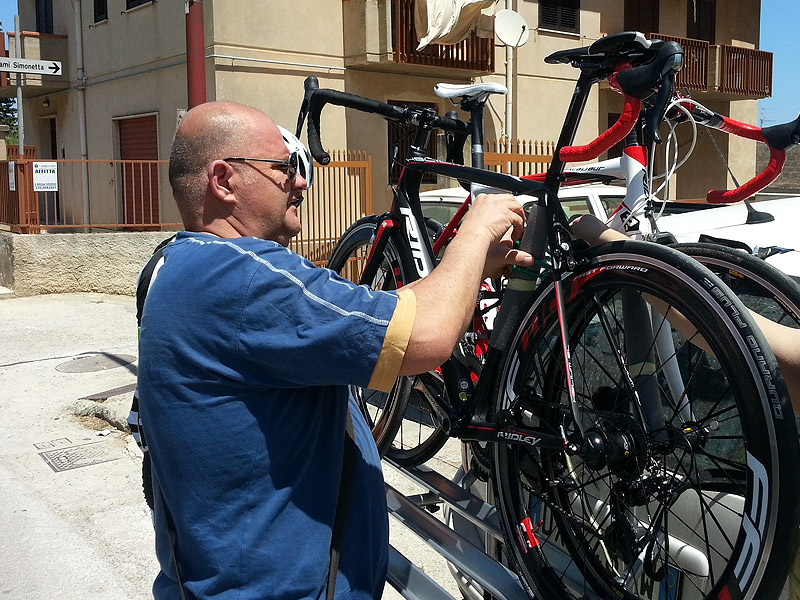 Giuseppe securing my bike on the bike rack 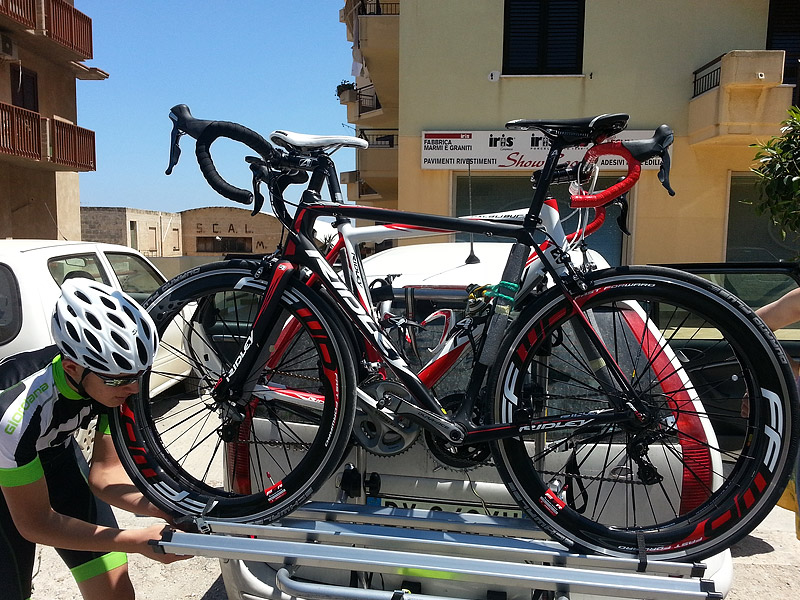 Both Ridleys on the bike rack

Luckily we were very close to the train station, so we said goodbye to Dominic and Eddie, who rode on to do the last 2 km. When Giuseppe brought me to Balestrate, he told me the clamp had to be ordered, but that he’d take care of that the next day.

As soon as the clamp has arrived and the bike is repaired I’ll update this post. Now I’m off for a ride in sunny Sicily on my “old” Ridley Excalibur.